If you're a writer who's been on Facebook or YouTube, you've probably been presented with a video ad for Ron Howard's Master Class on Directing. In the promo, he makes reference to a theory held by some that there are "seven stories". I thought we might briefly explore those seven story lines from which most tales spring forth. 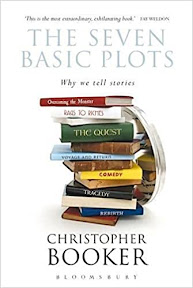 Christopher Booker is credited for writing the book on the subject, namely The Seven Basic Plots: Why we tell stories. At around 700 pages, it's a thorough analysis of each story line, breaking each down into their own set of stages. For the sake of this post, here is an oversimplification:

Overcoming the Monster
Not always a literal monster, but a major threat to our hero, who takes up the challenge to destroy it.

Rags to Riches
An underdog overcomes the odds to become top dog.

The Quest
Our hero must find a treasure of great value, and embarks on a journey to find it.

Voyage and Return
Our hero lands in a place unlike home and must learn new rules to prevail. Eventually he/she returns home better than before.

Comedy
A goal is impeded by funny obstacles.  Often, if the main obstacle is a person, they get a come-uppance in the end.

Tragedy
Our hero is his own worst enemy, with qualities that lead to his downfall.

Rebirth
The ultimate character arc, in which the hero transforms into a new being, literally or figuratively.

In reading these, you may have already assessed that many stories contain more than one of these plots, and you'd be correct. For example, isn't The Wizard of Oz a quest for a treasure as well as a voyage to a strange world? Booker himself acknowledges the frequent overlap of two or more of these plots, and even mentions two more which he considers less common:

Rebellion
The hero rebels but ultimately surrenders to, and perhaps joins, the powers that be.

Mystery
The hero seeks to discover the truth of a murder or other unexplained event.

Some writers feel that lumping stories into categorized plots is disrespecting their originality. Others feel that there are as many as 25 plots, not merely seven. Ron Howard implies that there is just one, but we may have to buy his Master Class to learn what that is.

Some writers dismiss such advice in the name of originality. They contend that referencing previously established templates will make their story too predictable. But in order to break rules with intention, first it helps to know the rules. In his classic book Story, legendary screenwriting expert Robert McKee declares: "A rule says you must do it this way. A principle says this works, and has through all remembered time."  Why reinvent the wheel from scratch when someone has already rounded off the edges for you?

The fact that we can think of our favorite movies or books and see how they fit into one or more of these story lines is testament to their enduring effectiveness and popularity. Could you possibly insert your hero's name into one of these seven plots and refine it into the logline for your next novel? Your own creativity will make the time-tested tale uniquely yours.