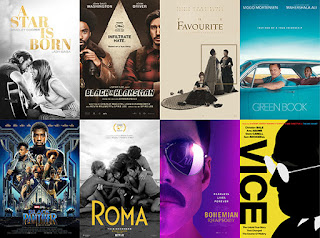 As any writer of creative nonfiction will attest, taking a real person’s life and determining the right parts to give it maximum impact is no easy feat. This year, most of the screenwriters vying for the Best Picture Oscar succeeded in doing just that. Six of the eight nominated stories had their origins in flesh and blood protagonists.


Harry Potter and the Prisoner of Azkaban director Alfonso Cuarón drew upon his childhood to write the semi-autobiographical Roma. He also directed, produced, shot and co-edited the film. This character drama about a housekeeper in Mexico bucks Hollywood tradition: it’s in Spanish, is in black & white, has no musical score, and stars an actress who never acted before but now is up for a Best Actress Oscar.


When a screenwriter has done time as the head writer for Saturday Night Live, it follows that his projects will project a propensity for parody. Such is this tongue-in-cheek take on the political career of former Vice President Dick Cheney. Adam McKay – whose credits also include Anchorman: The Legend of Ron Burgundy and Talladega Nights – wrote and directed this satire, which was originally intended by Paramount Pictures to be a drama.

Set in 1708, the black comedy The Favourite centers around Lady Sarah and her cousin Abigail, who compete for the attention and affection of Queen Anne. Co-writer and former journalist Deborah Davis went to night school to learn how to write a screenplay, specifically to tell this story of women in power and a female triangle. She admits to having known nothing about Queen Anne before doing research that included Lady Sarah’s memoir and a corresponding account from Winston Churchill.

Sasha Baron Cohen was originally enlisted to portray Freddy Mercury in the Queen biopic Bohemian Rhapsody, but when his reputation as a comedian was deemed to be too distracting, the role (along with a prosthetic overbite) was given to Rami Malek. Mercury’s singing was a combination of Mercury, Malek and an impersonator in this film written by Anthony McCarten, whose other biographical screenplays – The Theory of Everything (Stephen Hawking) and Darkest Hour (Winston Churchill) – were previous Best Picture nominees and garnered Best Actor Oscars for their stars. No doubt Rami Malek is equally hopeful.

The only Best Picture candidate that started out as a book is BlacKkKlansman, based on the memoir Black Klansman by Ron Stallworth. In the 1970s, Stallworth was a black detective who set out to expose the local Colorado chapter of the Ku Klux Klan with the help of a white partner who walked among the KKK. A bombing that is part of the story never actually took place in Stallworth’s experience, but director Spike Lee added it to heighten the action.

Black Panther is one of just two Best Picture nominees not based on a real person. This Marvel comic book hero was brought to life by writers Ryan Coogler (Creed) and Joe Robert Cole (The People v. O.J. Simpson). The movie had its origins when actor Wesley Snipes felt that Africa had been poorly portrayed in films and wanted to do a project of nobility. The project was delayed for many years because of confusion associating it with the Black Panther Party.

The other non-biographical nominee is a story that’s been retold every twenty or thirty years (1937, 1954, 1976, 2018). Each script reflecting the time in which they were made, A Star is Born always centers about a talented ingenue (either an actress or a singer) and her alcoholic mentor from whom she ends up stealing the spotlight. Eric Roth (Forrest Gump) and actor Bradley Cooper co-wrote the script with Will Fetters, who says this most recent installment was inspired by Kurt Cobain.

A casual coffee shop conversation between old friends turned into silver screen gold when Nick Vallelonga asked screenwriter Peter Farrelly (Dumb and Dumber), “Did I ever tell you the story about my father and Dr. [Don] Shirley traveling the South in 1962?” Nick’s father, a bouncer from the Bronx, had been hired by black jazz pianist Shirley to be his chauffeur and bodyguard during an eventful concert tour of the deep South. Aided by Nick’s own memories and letters by his late father, he and Farrelly collaborated with Brian Hayes Curry (Con Air) for months to write the screenplay for the comedy/drama Green Book.

Enjoy cheering on your favorites during the 91st Academy Awards this Sunday night (February 24). In the meantime, you can hear the aforementioned pianist Don Shirley performing his single “WaterBoy” on YouTube. But first, I invite you to check out the 2019 version of my annual video parody/tribute to the Oscars here or below. See you at the movies!

Posted by Gary Fearon No comments: